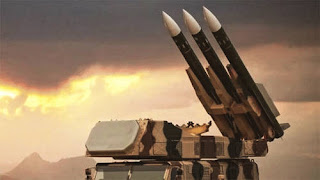 UMMATIMES - The Iranian military carried out a test firing of a "smart" missile at a range of 300 kilometers on Sunday.
This "smart" missile is capable of operating in "any weather conditions". said General Kioumars Heidari, head of the ground forces. However, he did not reveal where the test was carried out.
The Iranian national army has short-range guided missiles. They also operate long-range missiles for a range of up to 2,000 kilometers. These missiles are controlled by the Iranian Revolutionary Guards. This distance is considered to be able to reach the military bases of Israel and the United States.
Currently Iran and Russia are in talks to hold joint naval exercises in the northern part of the Indian Ocean. It is planned that the joint exercises will be carried out "in the near future." said Habibollah Sayyari, Deputy head of the army, Laksamana.
The exercise aims to "strengthen security" in the region. This is the second exercise since 2019, the two countries are holding a four-day exercise with the Chinese navy.
Iran is seeking to increase military cooperation with Beijing and Moscow while it is under US-led sanctions. Visits of Russian and Chinese naval representatives to Iran have also increased in recent years.
On Thursday, the Iranian Guards conducted drills near the Iraqi border using drones, helicopters and tanks. this is an attempt to pressure US President Joe Biden to ratify the nuclear treaty.