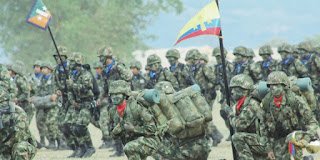 UMMATIMES - Two Colombian soldiers were killed and 11 others injured during a rebel attack. The attack used explosives. The attack occurred on Wednesday (24/2) local time.
"Terrorist acts that flagrantly violate international humanitarian law," said army general Eduardo Zapateiro, on his Twitter account, condemning the attack.
The attack was allegedly carried out by National Liberation guerrillas (ELN). Until now, ELN has not commented. The ELN is the last active rebel group operating in Colombia and since a historic 2016 peace accord that ended half a century of armed fighting by the much larger group of Revolutionary Armed Forces of Colombia (FARC).
The soldier is walking in a vehicle near the Venezuelan border. According to the army's confession, in a statement, it was said that the perpetrator had hit a homemade explosive.
"We will not rest until we neutralize it," he wrote on Twitter Colombian Defense Minister Diego Molano promised to take action against the attackers.
Colombia's high military command has accused the Venezuelan government of providing safe haven for ELN guerrillas who then crossed the border to carry out attacks.