Call on the UN to stop the Coup in Myanmar 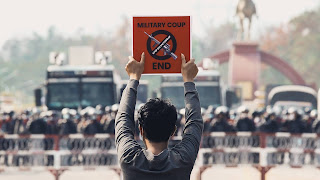 UMMATIMES - Kyaw Moe Tun, Myanmar's Ambassador to the United Nations, urged the international agency to intervene in the coup in his country. He asked the United Nations to use any means to stop the coup led by General Min Aung Hlaing and restore democracy in Myanmar.
"We need strong allies from the international community to be able to end the Myanmar coup as soon as possible, to prevent oppressed citizens, and to restore democracy there," said Kyaw Moe Tun.
He submitted his request at the UN General Assembly after Secretary General Antonio Guterres' special envoy, Christine Schraner Burgener, asked any country not to recognize the junta government. Approximately 193 countries participated in the UN general session.
The first step that can be taken is to provide a clear signal of support for democracy in Myanmar. In addition, influential member states at the United Nations can press the military junta in Myanmar to allow an independent examination of the situation there. says Christine Schraner Burgener.
"Unfortunately, the current regime forbids me from visiting in any capacity. It looks like they intend to continue with large numbers of arrests and urge the people to reject the existence of the National League for Democracy (NLD) in government." "If there is a massacre by the military - which unfortunately we have seen before - of a society that tries to voice its opinion, then let's act decisively and collectively," said Christine Schraner Burgener.