Changing to White Scenery of Rare Snowfall in Jerusalem 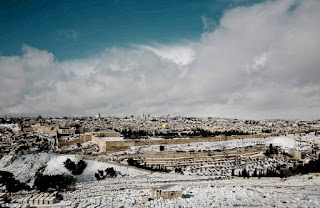 UMMATIMES - On Thursday (18/2) a rare sight was seen in Jerusalem, when the area turned white due to snowfall. The snow, which began to fall on Wednesday (17/2) night, also covered the Al-Aqsa Mosque complex and the Wailing Wall.
When Jerusalemites awoke at dawn, they saw that her yard was covered in snow. This rare moment is used by children to play snowball.
The snowfall caused the authorities to close public transportation and block the main road to Jerusalem. But when the rains subsided, the Jerusalem government reopened road access and public transportation services.
"We come from Tel Aviv to play in the snow. It rarely snows in Jerusalem. The last time seems to be 2013," said Ben Miller, a visitor from Tel Aviv.
According to estimates by the Jerusalem municipality, snow has accumulated up to 15 centimeters in some areas. The municipal government of Jerusalem deployed 250 snowcutters and bulldozers to clear roads, with priority given to routes to hospitals and higher neighborhoods.