Charges to Greece; His fighter jets disturbed the Turkish ships 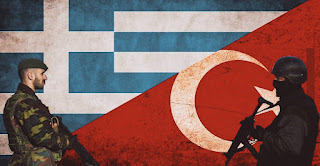 UMMATIMES - Turkey alleges that Greek fighter jets "interfere" with its ships, further heating up relations between the two countries. The fighter jets carried out disruption to Turkish ships in the Aegean Sea after tensions between the NATO allies escalated over maritime issues.
On Tuesday (23/2), Turkey's Defense Ministry said four Greek F-16 fighter jets were engaged in "provocative action" and "disturbed the Cesme ship in international northern Aegean waters".
"Unfortunately, this is one of the frequent annoyances by our neighbors in Greece," said Hulusi Akar, Turkey's Minister of Defense, whose Turkish side had provided the necessary response.
The tension between the two countries increased after on Monday (22/2) Turkey announced that the Cesme vessel would carry out a hydrographic survey from February 18 to March 2.
Turkey, however, insists the survey is "strictly hydrographic and technical" and says Greece has done similar work in the past.
Greek-Turkish relations are already strained by Ankara's gas exploration in the East Mediterranean. Even so, the two countries held direct talks last month for the first time in nearly five years. Turkish and Greek officials last month held exploration talks in Istanbul, the first since 2016. The talks came after being pushed by the European Union.
The Turkish defense says one of the Greek fighter jets dropped a cartridge husk two nautical miles from the Turkish ship. It is known that the cartridge serves to confuse or deactivate the opponent's radar.
The Greek Ministry of Defense denied the allegations made by Turkey. It said the Greek Air Force was conducting military exercises some distance from the Turkish ship and denied any "interference".
"There are no Greek fighter jets flying near the Turkish ship," the Greek Defense Ministry stressed.
The Greek Foreign Ministry said talks between the two sides would resume in Athens, Greece around early March. However, this matter is still waiting for an answer from Turkey.