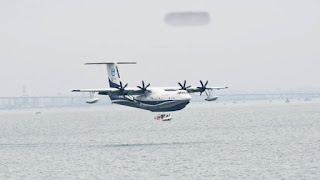 UMMATIMES - AG600 aka Kunlong is the largest amphibious aircraft made in China, the largest in the world. The AG600 seaplane is expected to be certified soon this year, so that it can be commissioned starting in 2022.
Aviation Industry Corporation of China (AVIC) as a manufacturer reports that most components that have entered the manufacturing phase will immediately take the "iron bird" test for quality. Iron bird tests are essential for designers to verify aircraft models, major parts and ground air systems.
Several major parts such as the nose, middle fuselage and rear fuselage will perform the test. Reporting from Xinhua.
China's large AG600 amphibious aircraft successfully completed its maiden flight on 24 December 2017 from Zhuhai Jinwan Airport. In 2020, this aircraft made its first successful takeoff from a water reservoir in 2018, followed by its maiden flight over the sea.
AG600 or Kunlong is the largest seaplane in the world with a weight of up to 53 tons, a length of almost 37 meters, and a wingspan of nearly 38 meters.