Death Penalty for corrupt ministers in the covid pandemic; Assessment of the deputy minister of law and human rights Indonesia 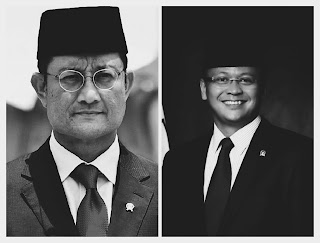 UMMATIMES - Edward Omar Sharif Hiariej, Deputy Minister of Law and Human Rights of Indonesia, assessed that the former Minister of Maritime Affairs and Fisheries Edhy Prabowo and Former Minister of Social Affairs Juliari Batubara deserve to be prosecuted with the death penalty. Because, the two former Ministers committed corruption during the COVID-19 pandemic.
This was conveyed by Omar in an online discussion held by the Faculty of Law, Gadjah Mada University, Yogyakarta, with the theme 'Critical Analysis of the Direction of Formation and Law Enforcement in the Pandemic Period', Tuesday (16/2/2021).
"In the context of criminal law enforcement there is a modification of criminal procedural law. The first is that materially existing criminal cases do not cause significant problems in law enforcement, meaning that materially they do not cause problems there are no obstacles there, on the contrary, the crimes committed In an era of pandemics like this, it must be interpreted as burdensome, "said Edward Omar Sharif Hiariej.
Edward Omar Sharif Hiariej talked about the modification of the criminal procedure law during the COVID-19 pandemic. He said that crimes committed during the COVID-19 pandemic must be interpreted as burdensome.
Edward Omar Sharif Hiariej also mentioned the corruption crime committed by Edhy Prabowo and Juliari Batubara. He explained, Edhy and Juliari committed corruption during an emergency, namely the COVID-19 pandemic. He considered that the two former ministers deserve to be prosecuted for the death penalty.
"The two corruption cases that occurred during the pandemic era, for example we all know, for example, that two former ministers were hit by the KPK OTT at the end of 2020. One was in late November, the other was on December 4. For me these two former ministers committed acts of corruption. who later got the OTT by the KPK, for me they deserve to be prosecuted under the provisions of Article 2 paragraph 2 of the Law on Eradicating Corruption, which amounts to the death penalty, "said Edward Omar Sharif Hiariej.
For information, the contents of Article 2 of Law Number 31 of 1999 concerning Eradication of Corruption Crimes as amended by Law Number 20 of 2001 concerning Amendments to Law Number 31 of 1999 concerning Eradication of Corruption Crimes:
Article 2 paragraph (1)
Anyone who illegally commits an act of enrichment of himself or another person or a corporation that can harm the state finances or the country's economy, will be punished with life imprisonment or imprisonment for a minimum of 4 years and a maximum of 20 years and a fine of at least IDR 200,000 .000 and a maximum of IDR 1,000,000,000.
Article 2 paragraph (2)
In the event that the criminal act of corruption as referred to in paragraph (1) is committed under certain circumstances, the death penalty may be imposed.
Edward Omar Sharif Hiariej explained the reasons why the two former ministers deserved to be threatened with the death penalty.
- First, his second crime was committed during a pandemic
- Second, corruption is carried out in the position of minister.
"Because in my opinion there are at least two reasons for weighting these two people, first they committed the crime in an emergency in this context is COVID-19, and secondly committed the crime in office. So the two burdensome things are more than sufficient to be threatened by Article 2 paragraph 2 of the Corruption Act, "said Edward Omar Sharif Hiariej.
For information, until now Edhy Prabowo and Juliari Batubara have been charged as suspects by the KPK in two different cases. Both are now detained by the KPK.
1. Edhy Prabowo was named a suspect in the case of suspected seed export bribery while he was Minister of the Ministry of Maritime Affairs and Fisheries. Edhy is suspected of receiving bribes worth Rp. 3.4 billion and USD 100 thousand.
2. Juliari Batubara became a suspect in the COVID-19 social assistance (bansos) corruption case while serving as Minister of Social Affairs. The KPK suspects that Juliari circumcised Rp.10,000 from each package of COVID-19 social assistance procurement worth Rp.300 thousand. The total money allegedly received was Rp. 17 billion.
# As per this news written 1 USD = Rp. 14,066