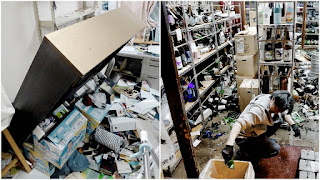 UMMATIMES - The earthquake occurred at 11:08 p.m. (1408GMT) at a depth of 60 kilometers (37 miles) in the Pacific, off Fukushima. The epicenter of the earthquake this time, is close to the epicenter of the deadly earthquake in 2011 that triggered a high tsunami and killed more than 18,000 people. said the Japanese meteorological agency. The US Geological Survey recorded the quake was measuring 7.0 at a depth of 54 kilometers.
No tsunami warning was issued when an earthquake measuring 7.3 on the Richter scale struck late Saturday off Japan's east coast, Japanese authorities said.
The quake produced a strong shaking along part of the east coast of Japan, and was felt strong in Tokyo, followed by aftershocks, including a jolt of magnitude 4.7. Several rail operations in the area were stopped after the earthquake. Until now, there has been no report of casualties, said JMA.
Local media reported that this year's quake was followed by a blackout affecting hundreds of thousands of homes in the Tohoku region of eastern Japan.
Prime Minister Yoshihide Suga was summoned to his office, and broadcaster NHK said the government would set up a special liaison office to coordinate with affected areas.
After an earthquake with a magnitude of 7.3 rocked Fukushima, Japan. TEPCO, the operator of the Fukushima nuclear plant said it is checking the status of the nuclear power plant facility. Saturday (13/1) night.
This is because the nuclear power plant facility exploded after the earthquake that rocked the area on March 11, 2011.
At that time, an earthquake destroyed the northeastern part of Japan and triggered a large tsunami. The earthquake and tsunami then caused a power outage and affected the nuclear plants in the area which eventually melted due to malfunctioning reactor coolers.
this led to the world's worst nuclear crisis in a quarter century after the leak of the Chernobyl nuclear facility in Russia.