English Court; Shell has to take responsibility in the Nigeria Delta due to the oil leak 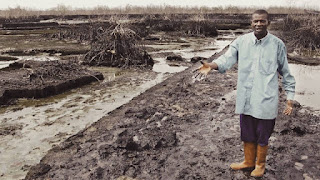 UMMATIMES - Nigerian fishermen and farmer groups sued the country's oil company, Royal Dutch Shell (RDS), over an oil leak in the Niger Delta.
British court in a group of 42,500 Nigerian fishermen and farmers after years of land and underground water in the Niger Delta have been contaminated with oil leaks.
The UK Court Judge said Shell had an obligation to be held accountable for the actions of subsidiaries outside the UK.
The Ogale and BIlle communities in Nigeria say their lives and health have suffered for years because repeated oil leaks have contaminated the environment there.
The law firm Leigh Day argued that Shell had a responsibility due to having significant control over its subsidiary, SPDC.
SPDC is a pipeline operator which is a joint venture between the Nigerian National Petroleum Corporation (55 percent share) and Shell (30 percent). In addition, there is the French oil company Total which owns a 10 percent stake and Eni from Italy 5 percent.
"(The verdict) is also an important moment in the accountability of multinational companies. An increasingly poor community is trying to hold powerful corporate actors to account and this assessment will significantly increase their ability to do so," said Daniel Leader, a Leigh Day advocate. 12/2).
"Regardless of the cause of the spill, SPDC is working to clean up and restore it. In addition, SPDC is also working hard to prevent the sabotage that created these spills," Shell said.
Upon the decision by the British Supreme Court, Shell expressed disappointment. Shell previously blamed sabotage for the oil leaks.
In 2015, Shell agreed to pay up to £ 55 million to the Bodo community in Nigeria as compensation for two crude oil leaks. It was known to date as the largest compensation awarded outside of court decisions for oil leaks in Nigeria.