Erdogan; America was in a terrorist group that killed 13 Turks 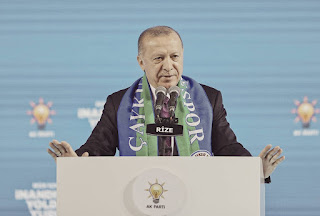 UMMATIMES - Recep Tayyip Erdogan, President of Turkey, accused the United States of backing up a terrorist group. After the Kurdistan Workers' Party (PKK) rebel group reportedly locked up and killed 13 Turks they were holding in Iraq.
"You say you don't support terrorists, when in fact you are on their side and behind them," Erdogan said Monday (15/2) as quoted by AFP.
The US State Department said it regretted the Turkish citizen's death but was still waiting for further confirmation from Ankara. The US State Department said "If reports of Turkish civilian deaths at the hands of the PKK, a terrorist organization, are confirmed, we condemn these actions as strongly as possible".
But Erdogan considered the US statement a joke. "The statements made by the United States are a joke," Erdogan said.
On that occasion Erdogan also asked allies of the North Atlantic Treaty Organization (NATO) to take sides. "Terrorist organizations are at our doorstep, on our borders, and are killing innocent people," said President Erdogan.
The US and Turkey's other Western allies recognize the PKK as a terrorist group. But Washington supports another Kurdish militia in Syria that Turkey considers an offshoot of the PKK.
The PKK's defense says the 13 people were killed when Turkish troops bombed the cave where they were being held. However, Turkey has admitted to launching a military operation against the PKK headquarters in northern Iraq to free the 13 hostages.
It is known, the PKK has launched a rebellion against Turkey since 1984, killing tens of thousands of people.