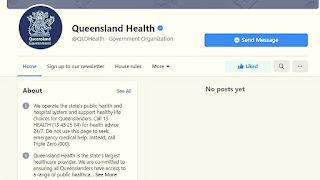 UMMATIMES - The Australian Prime Minister, Scott Morrison, was angry with Facebook. Because Facebook is blocking news content in Australia in protest of the new rule, which Facebook has to pay the media to display it.
"They may change the world but that doesn't mean they have to run it," "We will not be intimidated by this bullying by the tech giant, pressing parliament during a vote on the News Media Bargaining Code rules." The rules are likely to be approved by the Australian parliament. said Scott Morrison, the Prime Minister of Australia.
Google had threatened to leave Australia, but recently they reached an agreement. Facebook so far has not been able to accept these rules. Many parties have also criticized Facebook's actions for being removed from various important information, including health issues or emergency news.
"Facebook's action for unfriend Australia today, cutting out critical information on health and emergency services, is arrogant as well as disappointing." should have applied to them, "said Scott Morisson.
The new Australian regulations will force Facebook to pay Australian media companies fairly after posting links or news snippets in search results.
There are no regulatory plans yet to require smaller search engines like Bing or DuckDuckGo to pay, but the Australian government has yet to abandon that option completely.