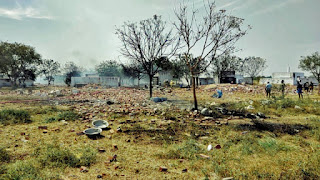 UMMATIMES - At least 19 people were killed and tens of others injured because of the unfortunate incident because a firecracker factory in India exploded on Friday (12/2) afternoon.
The explosion that occurred in Virudhunagar District was the worst since a similar incident several years ago in Tamil Nadu. Reported by AFP
"So far 34 people have been injured and are receiving treatment. Some of them have severe burns," said R Kannan, a factory official. R Kannan said around 74 people were at the factory at the time of the incident.
Indian Prime Minister Narendra Modi announced that the families of the dead would receive compensation of 200,000 rupees.
According to media reports, the factory was operating illegally. The local media portal, The Newsminute, reported the factory owner was missing and that officials were still investigating the cause of the explosion.