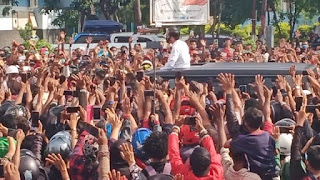 UMMATIMES - Fadli Zon, a politician from the Gerindra Party, said that the crowd during President Joko Widodo's (Jokowi) visit to Maumere, Sikka, East Nusa Tenggara, occurred because of the spontaneity of the residents.
Fadli said that the crowd that occurred when President Jokowi arrived should be dealt with. That way, he said, there was no double standard that occurred regarding health protocols.
Then Fadli Zon also highlighted President Jokowi who welcomed the spontaneity of the crowd in Maumere by standing while opening the glass. According to him, Jokowi's move could be interpreted as approval of the crowd.
"But Pak Jokowi also stood up to welcome the spontaneity. It could be interpreted as approval," he said.
As previously reported, the Presidential Palace gave an explanation of the crowd that arose when President Jokowi arrived in Maumere, yesterday. Deputy for Protocol, Press and Media of the Presidential Secretariat, Bey Machmudin, explained that at that time the residents were waiting for President Jokowi's entourage by the side of the road.
"It is true that the video was in Maumere. Upon arrival in Maumere, the President and his entourage continued their journey to the Napun Gete Dam. While on the way, the community was waiting for a series on the side of the road, when the series slowed down, the people advanced to the middle of the road, causing the convoy to stop," " It was the president's spontaneity to appreciate the enthusiasm of the people. The souvenirs were books, t-shirts and masks. But the point is, the president still reminds people to adhere to health protocols, "said Bey Machmudin, Deputy for Protocol, Press and Media at the Presidential Secretariat, Tuesday (23/2 / 2021).
Bey said the Maumere people spontaneously welcomed Jokowi's arrival. Jokowi also, said Bey, greeted and distributed gifts to the public.
"And it happens that the car used by the President can be opened, so that the President can greet the public, and at the same time reminds him of the use of masks. Because, if you pay attention, in the video it appears that when greeting the President, he reminded people to wear masks by showing the masks he was using," Bey said.
According to Epidemiologist Griffith University Dicky Budiman, this event should have been avoided. Moreover, he considered, East Nusa Tenggara was an area with poor Covid-19 control performance.
"This means that he came to a high-risk area. So that kind of crowd should be avoided. It is dangerous for our President. Even though he has been vaccinated does not mean he will not be infected, especially in such a crowded situation," said Dicky, Wednesday (24/2 / 2021).
However, Dicky said that does not mean that Jokowi should not visit his people during the pandemic. However, he emphasized the matter of safeguards that should have protected President Jokowi to avoid crowds.