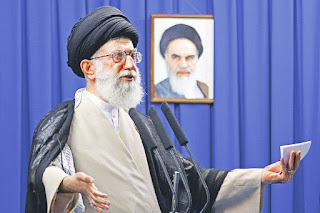 UMMATIMES - Ayatollah Ali Khamenei, Iran's Supreme Leader recently issued a legal statement stating that women in cartoons and animated films must wear the hijab.
"Is the hijab necessary for a character in an animated film (a three-dimensional painting derived from an artist's work?)," Wrote one questioner to Khamenei. The fatwa was issued by Khamenei in response to a question via the Telegram application regarding the use of the hijab in animated films.
"Although wearing the hijab in such a hypothetical situation is not necessary, observing the hijab in animation is necessary because of the consequences of not wearing the hijab," Khamenei said in response to the problem.
Since the 1979 revolution, it has been mandatory for women to wear the hijab to cover the head and neck. Women who leave their hair uncovered while in public are subject to harassment. (In recent years, women in Iran have been subjected to harassment by both police and men on the streets for not wearing the hijab 'properly').
But in the last two decades, many women have opposed the use of the hijab and veil. Women in Tehran and other large cities wear only a pashmina.