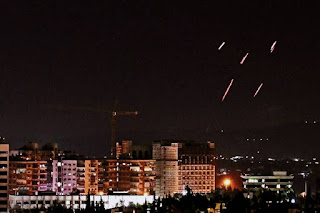 UMMATIMES - The Syrian military successfully intercepted an Israeli military aggression targeting the capital Damascus on Monday (15/2).
The Israeli air strikes are the latest to target pro-Iran force bases in Syria. reported by local media
"Our air defenses continue to thwart Israeli missile strikes over Damascus," the Syrian military said.
A number of Israeli military aircraft flew over the Golan Heights and dropped a number of missiles at a number of points as close to Damascus. Explanation from the Syrian armed forces. However, the Syrian military claims to have intercepted most of these missiles.
Eyewitnesses said they heard a number of large explosions south of Damaksus, where pro-Iran militants are based.
The Israeli military did not immediately comment on the air strike. But a senior Israeli military official acknowledged that tensions between the two countries have been increasing in recent times.
The Israeli military official said the escalation in air strikes was carried out to finish off the pro-Iran militant base and the country's military involvement in Syria.
The pro-Iran militant group led by the Lebanese group Hezbollah is currently controlling large areas in eastern and southern Syria, including several areas in the capital Damascus.
The pro-Iran group is also said to have occupied the Syria-Lebanon border area.
A number of Western intelligence sources said Iran's military influence in Syria continued to increase and this triggered a growing Israeli resistance.
Israel seeks to prevent Iran's expanding influence in the region, which is considered a threat to Tel Aviv's security.