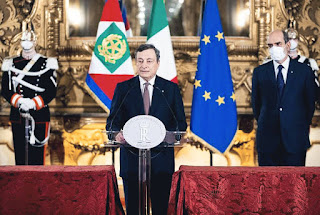 UMMATIMES - Mario Draghi, officially became the new Prime Minister (PM) of Italy on Friday (12/2). Mario Draghi announced the ranks of ministers he had chosen to run the new government. Draghi's ministers will be sworn in on Saturday (13/2) before they can fully exercise the government.
Mario Draghi himself did not come from a political party. While serving as President of the European Central Bank, Draghi became known as 'Super Mario' for saving the euro during the European debt crisis.
Sergio Matarella, President of Italy. gave the task to Mario Draghi to restructure the country's devastated economy and deal with the health crisis due to the Covid-19 pandemic.
Sergio Matarella, asked Mario Draghi as PM after a party dispute overthrew the previous government led by Giuseppe Conte. Giuseppe Conte resigned at the end of January.
After a week of consultations, nearly all the major parties across the political spectrum pledged support to Mario Draghi. Prominent figures from supporters were appointed ministers.
23 names of new ministers were appointed, eight of them women. Luigi Di Maio, leader of the 5-Star Movement, remains foreign minister. Roberto Speranza, while the current health minister, remains in office.
The senior Giancarlo Giorgetti League party was appointed minister of industry. Daniele Franco, Director General of Bank Italia who is not affiliated with political parties, was made finance minister.