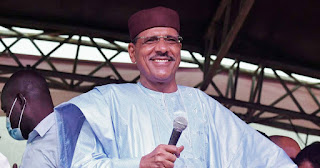 UMMATIMES - Mohamed Bazoum was declared the winner of Niger's presidential election on Tuesday (23/2/2021), while his opponents accused election fraud and opposition supporters burning tires in the streets.
Mohamed Bazoum, the 61-year-old former interior minister, won 55.75% of the vote in Sunday's election, according to the election commission. He defeated Mahamane Ousmane, the former president who was overthrown by a 1996 coup. Preliminary results have yet to be confirmed by the constitutional court.
"I am very grateful to the Nigerian people for the trust they have shown by electing me as president of the republic," "I will be a loyal servant to face all the problems facing our country." said Mohamed Bazoum on Twitter.
Shortly before the results were announced, Ousmane's campaign said there had been widespread fraud, including theft and stuffing of ballot boxes as well as threats against voters. However, they did not provide any evidence.
"We demand an immediate suspension of publication of these results, which in no way takes into account the expressed desire of the Nigerian people for change," said campaign manager Ousmane.
Outside the Ousmane campaign headquarters and in other parts of the capital Niamey, supporters protested by burning tires. The police fired tear gas to disperse them.
The election commission has not yet commented on the alleged irregularities. The mission of observers from the Economic Community of West African States said the vote was held "under conditions of being free, fair, credible and transparent".
However, it was marred by two attacks that killed eight people in two areas where Islamic militants were active, said commission chairman Issaka Souna.
Seven of the victims were election officials in the western Tillabery area, near the border with Mali, whose vehicle hit a landmine as they headed toward the polls.