Myanmar; Calls for Strike to the Arrest of Demonstrators 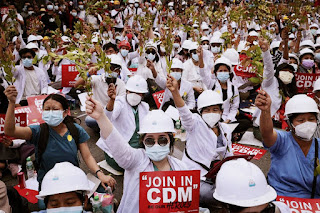 UMMATIMES - On Sunday, February 21th 2021 the Civil Disobedience Movement Group. Called for a strike on Monday, February 22, 2021.
The Civil Disobedience Movement is calling on the public to come together and make a summer revolution.
"It was found that the protesters had increased their incitement to riots and anarchy on February 22, 2021. The current demonstration is inciting people, especially teenagers, into a path of confrontation where they can lose their lives," warned the Junta military.