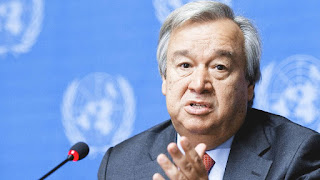 UMMATIMES - The UN Secretary General is angry that Myanmar's military is still repressive at the demonstration
The Myanmar military continued to act repressively against protesters staging peaceful demonstrations against the coup, Antonio Guterres, Secretary General of the United Nations, was angry with this.
Antonio Guterres said "I urge the Myanmar military to stop being repressive," "Immediately release political prisoners. End violence. Respect human rights and the wishes of the people who conveyed their aspirations in the last election. The coup has no place in the modern world," said Guterres. in the videotape of the opening speech for the 46th UN Human Rights Council conference in Geneva, Switzerland.
There were 640 activists and politicians who were detained by the military junta and the Myanmar security apparatus. Those arrested were railroad workers, civil servants and bank employees who chose to leave their jobs and join the demonstration.
"We have seen how democracy is neglected, with the use of lethal force, detention without due process, to unlimited oppression. The space for civil society is limited," said Antonio Guterres.
Antonio Guterres stated that the violence perpetrated by Myanmar's security forces against civilians was a serious violation and no one was held accountable for his actions. He said it was similar to the genocide case against the Rohingya ethnicity.