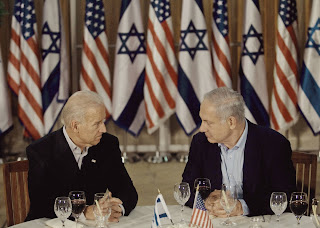 UMMATIMES - The failure of the president of the United States to call Netanyahu, Israel's prime minister after more than three weeks in office, was "not intentional". That the two leaders will speak soon. said Jen Psaki.
Joe Biden "hopes to speak to Prime Minister Netanyahu. I can guarantee it will be soon, but I don't have a specific time or date." "This is not intentional. Prime Minister Netanyahu is someone the president has known for some time. Obviously we have a long and important relationship with Israel. "This is just a reflection of the fact that we have only been here for three and a half weeks. He hasn't summoned any global leaders, "said Jen Psaki, the White House press secretary, on Friday.
When prompted by a reporter's question that Biden had summoned another major US ally, Jen Psaki said, “He has called a lot of them, that's true, some would argue that they haven't received calls and they are eager to take them, but I can assure you he will be soon. spoke to the prime minister and he is looking forward to doing so. "
In response to this "Prime Minister Netanyahu is not worried about the timing of the conversation," Erdan told Channel 12.
There has been much speculation recently that the new US administration is deliberately taking a cold approach to Netanyahu, but US prime ministers and officials have dismissed those concerns.
Estimates on Friday that Netanyahu will be the first Middle Eastern leader to receive a call from Biden. Tweet by David Makovsky, director of the Arab-Israeli Relations Program at the Washington Institute for Near East Policy
"How he spends his time, and the leaders he talks to, is a very clear reflection of the priorities and emergencies he has inherited as president," "He's faced more crises and emergencies both at home and abroad than any president. even since Franklin Roosevelt," "The Middle East is not in that first tier, but that is not insignificant," "And Israel is not insignificant. The call will occur. I'm sure that call will happen soon. "said the former US ambassador to Israel, Dan Shapiro.
Biden's phone calls to foreign leaders during his first week in office show a focus on immigration and trade (Mexico, Canada), shore up the NATO alliance against Russia (Britain, France, Germany, NATO Secretary General, Russia), and send signals to China and North Korea, with calls to South Korea and Australia.
Some of those who are already in contact with Israel, Secretary of State Antony Blinken, Secretary of Defense Lloyd Austin, and National Security Adviser Jake Sullivan have all spoken with their Israeli counterparts, and CENTCOM Commander General Kenneth McKenzie Jr. visit Israel.
"I am sure they will have the opportunity to speak in the near future." said Antony Blinken to CNN, after being asked about this issue.
On Monday Netanyahu said and denied any problems, he expected Biden to call him soon, and that the president was calling world leaders "as he pleases."
this has sparked petty political bickering in Israel. The lack of a phone call was "an obvious sign of displeasure." said Former Israeli consul general in New York, Dani Dayan
Danny Danon, former Israeli ambassador to the United Nations asked Biden to call Netanyahu in a tweet earlier this week.

@POTUS Joe Biden, you have called world leaders from#Canada#Mexico#UK#India#France#Germany#Japan#Australia#SouthKorea#Russia
Might it now be time to call the leader of #Israel, the closest ally of the #US?
The PM's number is: 972-2-6705555 pic.twitter.com/OYgPvVga6F

The Zman Yisrael website reports that some members of the Likud party believe Danon issued a tweet to humiliate Netanyahu and asked him to appoint him to a new role to avoid further embarrassment. Netanyahu decided to remove him from his post as chairman of World Likud.