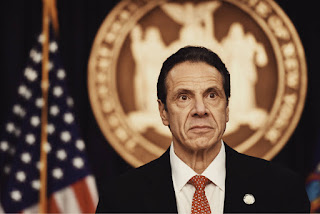 UMMATIMES - This is the second time Governor Cuomo has been implicated in allegations of sexual harassment. A woman has come forward to accuse New York governor Andrew Cuomo of sexual assault.
Charlotte Bennett, executive assistant and health policy adviser in Cuomo's administration until November, said she had abused him last spring, during the height of New York's fight against the coronavirus - led by Cuomo and when he received an international reputation for good leadership. "I understand that the governor wants to sleep with me, and feels very uncomfortable and scared," said Bennett.
Charlotte Bennett said Cuomo had asked a series of inappropriate questions about his personal life, including the age difference in romantic relationships, which he believed to be sexual offerings.
Bill de Blasio is calling for an independent investigation into the allegations against Cuomo made by another former aide, Lindsey Boylan. In an essay published on Medium, Boylan described many incidents with Cuomo, including an unsolicited kiss at his Manhattan office. Cuomo also denied Boylan's accusations.