Planning to close Guantanamo Prison; US 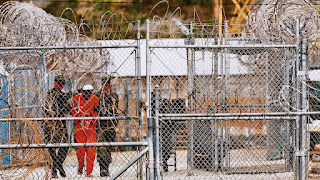 UMMATIMES - The United States has begun reviewing plans to close Guantanamo prison. The officials involved are drafting an executive decision that Biden will sign in the coming weeks or months.
"That must be our goal and our intention," said Jen Psaki, a spokesman for the White House, Saturday, February 13, 2021. When asked if Joe Biden would really close the high-security prison located at the Guantanamo Navy Station, Jen Psaki confirm it.
This closure is predicted not to occur in the near future. This is because there are political and legal obstacles that must be faced.
"We are carrying out a process at the National Security Council (NSC) to assess the current state of affairs inherited by the Biden administration from the previous administration, in line with our broader goal of closing Guantanamo," said Emily Horne, a spokeswoman for the NSC.
"The NSC will work closely with the Department of Defense, State, and Justice to make progress towards the closure of the GTMO facility, as well as in consultation with Congress," said Emily Horne.
Guantanamo Prison was built to house foreign suspects after the September 11, 2001 attacks on New York and Washington. This prison symbolizes the excesses of the US war on terror because of its harsh methods of interrogation and is considered by critics to amount to torture.