Post the United Airines incident; An appeal to stop using the Boeing 777-200 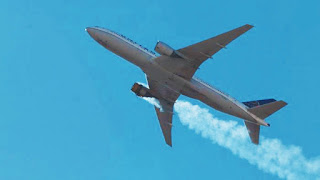 UMMATIMES - After the incident, the Boeing 777-200 United Airlines engine exploded in the middle of a flight on Saturday last week. Boeing recommends airlines using the same type to withhold its use first. Especially, said Boeing, for the Boeing 777-200 which uses the Pratt & Whitney PW4000 engine
"While the investigation by the National Transportation Security Council (NTSB) is underway, we recommend that the airline keep the operations of 69 active aircraft and 59 in storage for the type 777 driven by Pratt & Whitney 4000-112. Wait until there is certainty about that," "We appreciate the Bureau decision. Japan Civil Aviation and the United States Federal Aviation Administration ... We are working with regulators while they carry out investigations with Pratt & Whitney, "Boeing said in a press statement, Sunday, February 21, 2021.
There are three countries (America, Japan, South Korea) whose airlines use the Boeing 777-200 type. In America, only United Airlines uses this type of aircraft.
"Of the 52 Boeing 777-200 we have, 24 of our units have stopped using them. The rest is still in storage," United Airlines said in a press statement.
Boeing has received a number of notifications from regulatory agencies in Japan and America regarding their response to the United Airlines incident. So far, both have agreed that the use of the Boeing 777-200 with the Praat & Whitney PW4000 engine needs to be restrained first.
The NTSB, in a separate statement, stated that the investigation had started since last Sunday. And, the examination was focused on the engine, the plane, photos and videos of the seconds the engine exploded. The data in the black box will also not go unnoticed.
There were no casualties due to the incident where the United Airlines plane's right engine exploded, the shrapnel fell and were scattered all over the city of Denver. The unlucky residents found the pieces of the machine damaged their property.