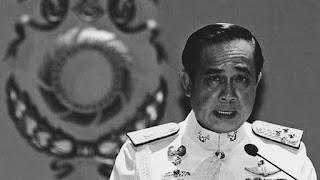 UMMATIMES - Thai Prime Minister Prayuth Chan-ocha escaped a no-confidence vote after four days of critical debates and protests calling for Prayuth to be ousted.
A vote of no-confidence through a vote by members of parliament on Saturday, February 20, 2021. Thailand's Prime Minister Prayuth Chan-ocha and nine other ministers reportedly survived.
The escape of Prayuth Chan-ocha from the motion of no confidence coincided with the return of pro-democracy protesters after being stopped by the second wave of the corona virus outbreak that hit Thailand.
On Friday, 19 February 2021, demonstrators gathered at the parliament building as a precaution during the vote (vote of no confidence). The number of demonstrators on Saturday, February 20, 2021 is even more. Earlier this month, demonstrators demanded the release of activists who clashed with police officers.
Prayuth Chan-ocha, who led a coup to overthrow the elected Prime Minister of Thailand in 2014, is in fact still holding office. His political rivals have projected he will escape the vote of a no-confidence vote that the government coalition controls a lower house majority.
The President of the National Council, Chuan Leekpai when announcing the results of the vote count, said "The results of the vote count still have confidence (in the Prime Minister)."
Opposition lawmakers have criticized the slow pace of launching the coronavirus vaccine and Thailand's economic policies. They promised to carry out an investigation.
"We opened a wound and are now going to sprinkle salt on it," said Pita Limjaroenrat, head of the Movement Party.