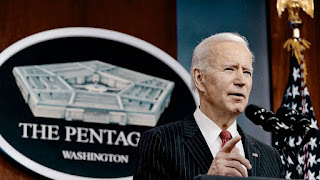 UMMATIMES - American President Joe Biden ordered air strikes on Iranian-backed Shiite militia facilities in Syria. Many consider it an exaggeration.
"Joe Biden is as bad as Donald Trump's rhyme." Criticism comes from the Professor of British Literature and Orientalism at the University of Tehran, Seyyed Mohammad Marandi. What Joe Biden did is similar to what Donald Trump did when he ordered the assassination of Iranian General Qaseem Soleimani last year. Their orders were shared in response to threats to the American military in Iraq.
"The Joe Biden administration is trying to present this attack as a measured measure and the result of consultation with its allies. However, it will not defuse the conflict there." "The attack ordered by Joe Biden sent a strong message to Iran or rather put pressure on Iran," criticized the CEO of political consulting firm Stratega, Hillary Mann Leverett, calling Joe Biden's actions will not solve the problems in the Middle East.
"The situation was not met in the attack that Joe Biden ordered," Criticized Mary Ellen O'Connell, Professor of Law at Notre Dame Law School. Joe Biden's actions are a violation of international law. The UN Charter clearly stipulates that military force can only be used in other sovereign areas if it is indeed responsible for armed attacks on other areas.
Joe Biden's attack on Syria was described as an operation to paralyze the Shia militia operations from their ability to carry out attacks on other areas. In addition, also to retaliate against the attack on Erbil International Airport on February 15 which injured various American contractors.