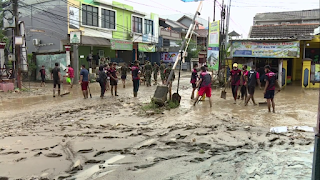 UMMATIMES - Indonesia, Residents clean up dirt from a flood in Bekasi, Indonesia
The floods that hit the Pondok Gede Permai (PGP) residential area in Bekasi City receded, Sunday (21/2/2021). A number of residents have now returned to their homes and cleaned up the remnants of the flood.
A number of residents were seen cleaning rooms and items that were previously submerged in mud. A local resident, Ahmad (23) said that the military apparatus together with the disaster management agency and residents had also started cleaning up the mud and rubbish on Jalan Pondok Gede Permai so that vehicles could pass through. "It has started cleaning since this morning. Earlier there were also many officers, but there was still a lot of mud on the side of the road,"
Meanwhile, the Bekasi River embankment behind the housing that collapsed due to the swift flow of water is now starting to be repaired. Heavy equipment has also been deployed to the site to build temporary embankments during the permanent embankment repair process.
This was done to anticipate the high water discharge in Bekasi River and cause flooding in the housing complex. Based on data from the Bekasi City Disaster Management Agency, as of Sunday afternoon there were 127 flood-affected residents who fled to the Bekasi City BPBD Logistics Building.
The Pondok Gede Permai area was inundated since Saturday (20/2/2021) and gradually receded on Sunday (21/2/2021) morning. The houses of residents in the Pondok Gede Permai area this morning are no longer submerged by floods. The flood with a height of about 1 meter due to the breakdown of a river embankment in the housing complex was known to have receded on Saturday night at around 20.00 WIB.