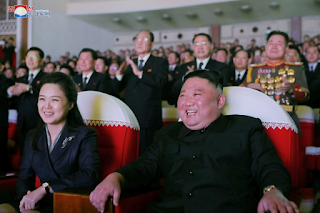 UMMATIMES - Ri Sol-ju, wife of North Korean leader Kim Jong-un, has disappeared from the public eye for nearly a year, allegedly due to childbirth.
"The appearance of Ri Sol-ju after being absent for one year and one month due to childbirth," "North Korea probably wanted to prevent the pregnancy from being seen in public and chose to keep it a secret." said the statement of the National Security Strategy Institute.
The prediction was made by North Korea's monitoring agency for activities, the National Security Strategy Institute, as quoted by the South Korean news agency, Thursday (18/2). However, they did not specify the evidence that could strengthen their estimation of the appearance of Ri Sol-ju.
Kim and Ri are currently said to have three children. However, the identity and age of the couple's children is not kept secret.
According to the NIS report, Ri allegedly did not appear in public to comply with the health protocol for preventing the corona virus. They also said that Ri was probably spending time with her children and so far they have not found anything out of the ordinary that causes her to never appear before society.
Ri Sol-ju was seen accompanying her husband to watch an art performance on Tuesday (16/2/2021), to commemorate the birthday of his late father-in-law, Kim Jong-il.
Ri Sol-ju was last seen in the mass media on January 26, 2020. At that time she was also accompanying her husband to watch an art performance commemorating the Chinese New Year the day before.
Ri Sol-ju's figure caught the world's attention when he first appeared in 2012. Because Kim had never previously brought his wife in his activities. It is not yet known the reason why Ri Sol-ju has not appeared for almost a year.