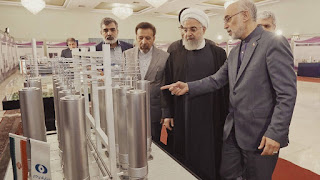 UMMATIMES - Russia urged Iran to refrain from enriching uranium metal. In a report by the International Atomic Energy Agency (IAEA), it was stated that Iran would make uranium metal from raw materials, and then enrich it up to 20 percent.
"Director General Rafael Mariani today delivered the news to IAEA member countries about the latest developments regarding the research and development program for metal production of uranium to be used as fuel for the Tehran Research Reactor," "IAEA on February 8 verified there were 3.8 grams of uranium metal in the Metal Materials Manufacturing Plant. Burn it in Esfahan, "the IAEA statement said.
Iran is considered to have committed a new violation of the boundaries set in the Tehran nuclear deal with the world.
"We understand the logic of their actions and the reasons driving Iran. However, it is necessary to demonstrate restraint and a responsible approach," said Sergei Ryabkop, Deputy Foreign Minister.
Sergei Ryabkob said Iran's move showed Tehran's actions. "The determination not to give up on the current situation."
The landmark deal contained a 15 year ban on the production or acquisition of plutonium metal or uranium or mixtures thereof.
The agreement was signed by the United States, China, Germany, Russia, France and Britain in 201
Iran's production of uranium metal has the potential to again violate the nuclear program limitation pact agreed in 2015.
Britain, Germany and France, as the countries that signed the 2015 nuclear restriction agreement, expressed their concern if Iran would continue with its plan to manufacture uranium metal. This is because the material is deemed useless for the benefit of the people, and is vulnerable to being used by the military to make nuclear warheads.
Iran has also said it will continue to increase its nuclear enrichment beyond the limits set out in the 2015 nuclear accord, in response to sanctions. Uranium metal is a sensitive problem because it is used as a component in the manufacture of nuclear weapons.