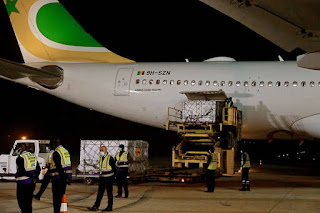 UMMATIMES - Senegal received first Sinophram Covid-19 vaccine on Wednesday, which was purchased from China. Senegal says it paid 2 billion CFA francs.
Senegal has turned to China as it awaits disbursement of funds through a program supported by the African Union and the World Health Organization (WHO).
A total of 200,000 doses, enough to vaccinate 100,000 people, arrived on an Air Senegal charter flight from Beijing to Dakar, received by President Macky Sall and the Chinese ambassador.
"Today is a historic day," said Macky Sall. "We are in a new phase of fighting with us against our common enemy."
Macky Sall said vaccinations would begin "very soon". Senegal targets about 90% of its 3.5 million people, including health workers and high-risk individuals between the ages of 19 and 60, by the end of 2021.
As a lower-middle-income country, Senegal is eligible for approximately 1.3 million doses free of charge in the first wave of disbursement of the WHO's COVAX program. Deliveries are expected to start in late February and most of them will arrive in March, the WHO said.
So far, there have been more than 31,000 cases and 769 deaths from COVID-19.