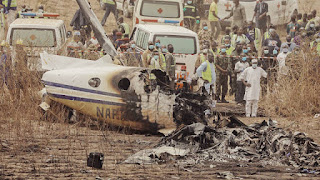 UMMATIMES - The plane belonging to the Nigerian air force crashed near Abuja Airport on Sunday. Seven people were reported killed. "The plane crashed while returning to Abuja Airport after reporting engine failure," said air force spokesman Ibikunle Daramole.
Daramole said the plane was a Beechcraft King Air 350i. The plane was en route to Minna City or about 110 kilometers (68 miles) northwest of the capital.
The air force did not provide the identities of those who died in this accident. But they have ordered an investigation.
The President of Nigeria, Muhammadu Buhari, expressed his condolences to the air force for this accident.
From the photos circulating, it appears that several military and airport officials took the charred remains of the fuselage. In addition, there was a chemical smell on site but there was no fire or smoke. One of the eye witnesses Alba Lawal said before falling, he saw the plane trying to land at Abuja Airport.
"When he (the plane pilot) was about to get off, he struggled to get back to the airport, in the end he just fell," Lawal said.
"I just saw everything exploding, there was fire and smoke. When I got there, I saw bodies on the ground," he said.