Singapore; Concern Over the Political situation in Myanmar 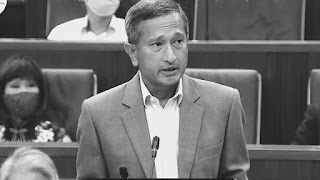 UMMATIMES - Vivian Balakrishnan, Singapore's Minister of Foreign Affairs, voiced concern over the political situation in Myanmar. Tuesday, March 16, 2021.
Singapore hopes that the authorities in Myanmar can take important steps to ease tensions in Myanmar at this time and create a peaceful resolution. The hope of a Balakrishnan.
"These are all warning conditions. We urge the authorities to exercise complete restraint. There should be no violence against unarmed civilians, ”said Vivian Balakrishnan.
Vivian Balakrishnan sincerely hopes that Aung San Suu Kyi and President Win Myint, as well as other detained officials, can be released. Vivian Balakrishnan hopes that negotiations can be created between the detained officials and the current military government.
Balakrishnan assessed that the coup that occurred was a major setback for Myanmar's economy. This condition will make entrepreneurs from Singapore evaluate their business risk profile.
So far Singapore has not supported the imposition of sanctions on Myanmar because it could injure the country's people.