Support for Saudi Arabia by Bahrain and the UAE; Reject US intelligence reports 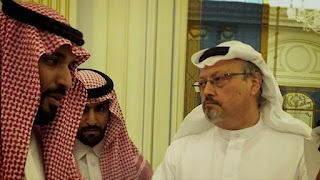 UMMATIMES - The governments of Bahrain and the United Arab Emirates are backing Saudi Arabia in rejecting US intelligence reports that claim the Crown Prince, Prince Mohammed bin Salman, was involved in the murder of journalist Jamal Khashoggi.
The US Treasury has imposed sanctions on Khashoggi's killing team, the Tiger Squad, which it says moved under the orders of Mohammed bin Salman.
The US Treasury Department stated that they would block the Tiger Squad's assets. The US also bans all transactions with the team they call the Rapid Intervention Force. Apart from the Tiger Squad, a Saudi intelligence official, Ahmed al-Asssiri, has also been the target of similar sanctions for his involvement in Khashoggi's murder.
"Bahrain rejects everything that tarnishes the sovereignty of Saudi Arabia," said a statement by the Bahraini government broadcast through the BNA news agency, Saturday (27/2).
The Bahraini government says they support the role of Saudi, King Salman and Prince Mohammed bin Salman in seeking to maintain security and stability in the Arab region, as well as support the development of the world economy.
The Ministry of Foreign Affairs of Saudi Arabia has denied the contents of US intelligence documents that mention Prince Mohammed bin Salman's involvement in the murder case of Jamal Khashoggi in 2018. They claim the document contains inaccurate information and conclusions.
Khashoggi is a columnist for The Washington Post newspaper who often criticizes the Crown Prince.