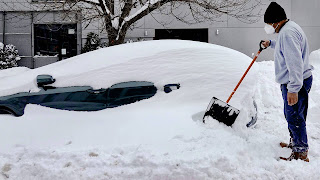 UMMATIMES - As a result of winter storms, millions of people in Texas, United States experienced power outages, Wednesday (17/2). In addition, residents are also reported to be experiencing water shortages. more than 20 people died from the storm, mostly from traffic accidents.
Hundreds of thousands of residents of the metropolitan city of Houston are experiencing power outages and water shortages. "The water pressure is very low," said Sylvester Turner, Mayor of Houston.
Nearly half of the state's wind power plants died in the storm. More than three million residential, commercial and industrial customers were living without electricity in Texas as of Tuesday night. According to the Poweroutage.us website. Blackouts were imposed in some areas to save electricity for hospitals, police and fire stations.
Winter storm warnings for east Texas to the East Coast state of Maryland. says the National Weather Service (NWS). The NWS said several regions, Texas, Louisiana, Arkansas and Mississippi would face heavy hail and snow. The storm will then move northeast.
On Monday night, a winter storm caused at least four tornadoes, including one off the coast of North Carolina, which killed at least three people and injured 10.
"The temperature will still remain 20 to 35 degrees (Fahrenheit) below normal," said NWS.