The strong condemnation of Russia for the US airstrikes on Syria 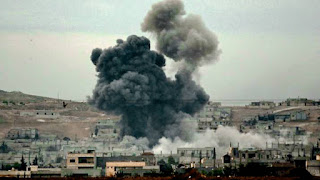 UMMATIMES - Russia's strong condemnation of US air strikes targeting pro-Iran militia bases in Syria on Thursday evening local time. A total of 17 pro-Iran militias were killed in the attack.
"We strongly condemn such actions," "We urge unconditional respect for the sovereignty and territorial integrity of Syria," Russian Foreign Ministry spokeswoman Maria Zakharova said on Friday (26/2).
"There are many casualties. Initially, at least 17 troops were killed, all members of the Popular Mobilization Forces," said Director of SOHR (Syrian Observatory for Human Rights), Rami Abdul Rahman,
Biden ordered the US Ministry of Defense (Pentagon) directly to launch the attack. Pentagon spokesman John Kirby said the attack destroyed a number of facilities at border control points used by Iranian-backed militant groups, including Kata'ib Hezbollah and Kata'ib Sayyid al-Shuhada.
It is suspected that this attack was in response to a rocket attack that hit a US military base in Iraq on February 15. When three rockets attacked Erbil airport, Iraq.