The US $ 1.9 trillion COVID-19 stimulus was passed by the American Parliament 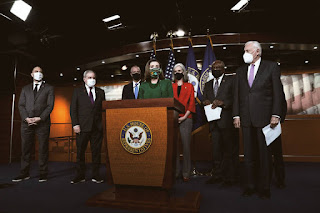 UMMATIMES - American President Joe Biden won his first legislative victory with the US Parliament passing the US $ 1.9 trillion COVID-19 stimulus package. The Stimulus Package won with 219 votes against 212. Joe Biden's administration is targeting a liquid stimulus package in March 2021. In that period, the previous aid package will end. "Americans have the right to know that the American government is always on their side," said the Speaker of the American Parliament, Nancy Pelosi, Saturday, February 27, 2021.
The victory was helped by a dominant Democratic position in the American Parliament. Democrats say the stimulus package is needed to help the 500,000 Americans who have lost their jobs due to the COVID-19 pandemic.
The aid package will include US $ 415 billion for the COVID-19 response, US $ 1 trillion for direct household assistance, and US $ 440 billion for small businesses and communities hit hard by the pandemic.
The stimulus payment check will be issued for US $ 1,400, or on top of the US $ 600 check sent by the latest congressional stimulus package legislation. Additional unemployment insurance also increased to US $ 400 per week from US $ 300 per week previously. The duration was extended to September.
The stimulus package still requires approval from the US Senate before it is fully liquidated. As for the Democrats, as the majority and supporters of Biden, are looking for ways to pass it without the support of the Republicans. The positions of Democrats and Republicans differ slightly in the American Senate.
Republicans, who supported the next stimulus packages, thought Joe Biden's draft was too much. Apart from being relatively close to the previous stimulus package and potentially increasing US debt, the details of its designation are also ineffective. Republicans claim only 9 percent of the total packages are directly related to COVID-19.
"This is wasting money without clear accountability," said Chief Republican in the US Parliament, Kevin McCarthy.