The vision of Crown Prince Mohammed bin Salman; one of which is advancing Saudi Arabian women in various fields 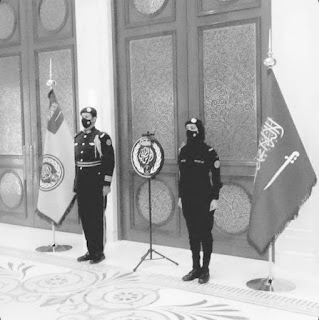 UMMATIMES - Enrollment of Female Soldiers, Saudi Arabia is starting to open registrations for female soldiers. The Saudi Ministry of Defense said both men and women can now apply for military service through the unified admissions portal. According to the Saudi Ministry of Defense, Saudi women can be recruited as soldiers, spear corporals, corporals, sergeants and staff sergeants.
Women may apply to join the Army, Royal Air Defense, Royal Saudi Navy, Royal Saudi Strategic Missile Force, and Armed Forces Medical Services. reported by Alarabiya, Monday (22/2)
The move was carried out under Crown Prince Mohammed bin Salman's Vision 2030 initiative, one of which is advancing Saudi Arabian women in various fields.
Military entry requirements for women
- A woman must be between 21 and 40 years old, minimum height 155 cm, and not a government employee.
- Prospective soldiers must also pass admission procedures, have no criminal records, and be medically fit.
- Saudi Arabian women, must have an independent national identity card, have at least a secondary school education, and must not marry a non-Saudi Arabian national.
Military entry requirements for men
- Between 17 and 40 years old and have a minimum height of 160 cm.
- Must pass admission procedures, have no criminal record, and prove they are medically fit for duty.
Saudi Arabia has allowed women to join the security forces, and allowed them to drive vehicles and travel abroad without needing permission from a male 'guardian'. In recent times, Saudi Arabia has indeed sought to improve the country's image and maximize the tourism sector as a plan to expand the country's source of income apart from exports of crude oil.
The Kingdom of Saudi Arabia has also issued regulations that allow foreign and unmarried tourists to share a room in the lodging they rent. They did this as a follow-up to the decision to start granting visas for tourist purposes.