Trump; Signs running for the 2024 presidential election at the Republican Conservative Forum 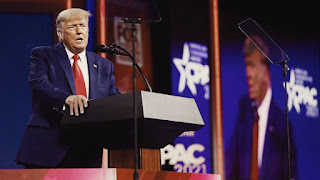 UMMATIMES - Former President Donald Trump has hinted at running for president in the 2024 US Presidential Election during his Conservative Political Action Conference (CPAC) speech in Orlando, Florida.
"With your help we will reclaim the House of Representatives, we will win the Senate and then the Republican president will return triumphantly to the White House. I wonder who it is?" "Who, who, who, I wonder," Trump said, March 1, 2021.
Donald Trump pledged to help Republicans regain the majority, lost during his presidency, in the US House of Representatives and Senate in the 2022 congressional elections and claim himself as a deserving Republican candidate for president in 2024.
Donald Trump does not appear to dim his anger at Republicans who voted to prosecute or punish in a failed congressional attempt to hold him accountable for instigating the deadly attack on the US Capitol on January 6.
Donald Trump named several Republicans who supported his impeachment, such as Senators Mitt Romney and Pat Toomey and lawmakers Liz Cheney and Adam Kinzinger. Trump will support candidates who oppose them in the Primary Republic election. "Get rid of them all," said Donald Trump.
"They just lost the White House," "But who knows, who knows, I might even decide to beat them a third time." said the former Republican president after criticizing Biden's handling of border security.
Civil war has erupted within the Republican Party, with high-profile Republicans such as Senate Minority Leader Mitch McConnell sidelining Trump at the GOP, and others such as Trump's ally Senator Lindsey Graham believing that the party's future hinges on Trump's support base.