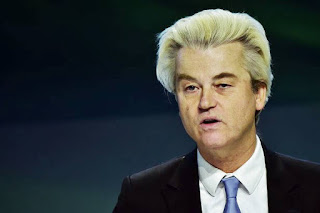 UMMATIMES - Geerts Wilders, a Dutch politician, has been investigated by the Turkish Prosecutor's Office for the alleged humiliation of President Recep Tayyip Erdogan. This was done after President Erdogan reported Wilders' actions to the local prosecutor's office on October 27, 2020. Wilders is the Chairman of the Dutch Freedom Party. Wilders became one of Europe's leading right-wing politicians.
Erdogan was named a terrorist in a tweet by Geerts Wilders. He also urged the Dutch Prime Minister, Mark Rutte, to expel the Turkish ambassador from the Netherlands. In addition, Wilders urged Turkey to be expelled from membership of the North Atlantic Treaty Organization (NATO).
The Turkish prosecutor's office in Ankara is trying to investigate Wilders' tweets, including uploading photos and posts that allegedly insult President Erdogan.
Wilders' tweet also drew criticism from Omer Celik, a senior leader of the Justice and Development Party (AKP).
"Fascist figures who insult our president will probably have the same fate if he lived during World War II. If he lives in the Middle East, he is likely to be killed by ISIS," said Omer Celik, spokesman for the AKP Party, Tuesday (16/2).
Geerts Wilders' Lunge
Wilders' discourse on immigration policy sparked heated debate in the Netherlands. Although Wilders has not yet entered the Dutch Government.
In 2011, Wilders' statement must end at court. he was found not guilty after being sued for claiming the teachings of Islam were similar to Nazi Germany and for calling to ban the Koran in the Netherlands.
In September 2020, the Court cleared Wilders of a suit over race discrimination, but was found guilty because he was found guilty of deliberately insulting the Moroccan nation.