United Nations; Malnutrition in Yemen, about 400 thousand children under 5 years are estimated to die of starvation 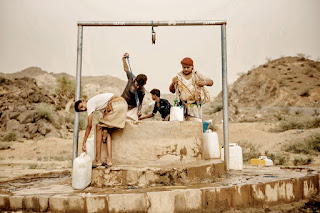 UMMATIMES - The soaring rates of severe malnutrition due to war and the coronavirus pandemic are estimated that 400,000 children under the age of 5 in Yemen could die of starvation by 2021, the United Nations (UN) analyzes.
Severe acute malnutrition means there is a risk of death from lack of food. Aden, Hodeidah, Taiz and Sanaa were among the worst-affected areas.
The United Nations projects a 22 percent increase in severe acute malnutrition among children under 5 in Yemen, compared with 2020.
"These numbers are another call for assistance from Yemen where every child who is malnourished also means a family struggling to survive," said David Beasley, Executive Director of the World Food Program (WFP), Saturday, February 13, 2021.
In addition, it is estimated that 2.3 million children under 5 years of age will suffer from acute malnutrition by 2021. Acute malnutrition among children and mothers in Yemen is increasing every year due to conflict. It is exacerbated by high rates of disease and increasing levels of food insecurity.
About 1.2 million pregnant or nursing women are projected to experience acute malnutrition this year.
Nutrition and other services that prevent millions of people from hunger and disease are gradually shutting down in Yemen amid an acute shortage of funds.
Famine has never been officially declared in Yemen. The United Nations says the country is experiencing the world's biggest humanitarian crisis.
Along with conflicts, economic downturns and pandemics, last year's shortage of donations has also contributed to the worsening humanitarian crisis in Yemen. The United Nations says it received only US $ 1.9 billion of the US $ 3.4 billion needed for a humanitarian response. This program has begun to be closed and minimized.
This UN warning comes nearly six years after the outbreak of a war that left 80 percent of the population dependent on humanitarian assistance.