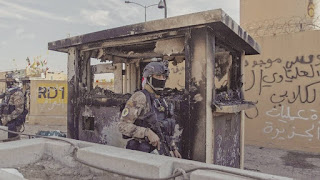 UMMATIMES - The rain of rockets hit the military compound which is the base for a coalition of US troops. A civilian contractor was killed and a US soldier was injured in a rocket attack on Erbil airport in northern Iraq, Monday (15/2).
"Initial reports that Indirect Fire landed at a coalition force base in Erbil. There were 1 civilian contractor killed, 5 civilian contractors injured and 1 US service member injured. More information follows," Operation Inherent Resolve spokesman Colonel Wayne Marotto wrote on Twitter.
The US was furious about the attack. said US Secretary of State Antony Blinken.
"We send our condolences to the loved ones of the civilian contractors who died in this attack, and to the innocent Iraqi people and their families who suffered from this cruel act of violence," said Antony Blinken.
Antony Blinken spoke with Iraqi Kurdish Regional Government (KRG) Prime Minister Masrour Barzani to discuss the attack. The United States supports the investigation and holds those involved accountable.
This rain of rockets was the first thing to target US diplomatic facilities in Iraq in the last two months.
US and Western military and diplomatic facilities have been the target of dozens of rockets and bomb attacks since 2019. Most of the attacks took place in Baghdad.
Local authorities asked residents not to leave their homes while authorities were investigating the incident.
Until now, no group has claimed responsibility for the attack. The Iraqi and US governments are gathering intelligence to try to investigate where the rocket was launched.