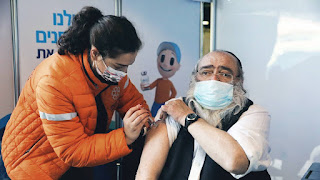 UMMATIMES - Pfizer's vaccination in Israel has proven to be 98.9 percent effective in preventing hospital admissions and reducing mortality. Israel has begun to ease lockdowns and boundaries amid the Covid-19 pandemic.
Starting on Sunday (21/2/2021), shops and libraries, other public facilities are also open such as fitness centers, hotels and synagogues. It can be opened, but the rules for maintaining distance and wearing masks are still mandatory. Israel's Health Ministry said that the measure was an early stage of returning to normal routine.
Apart from exercising in public places, concerts are also allowed with a capacity of 75 percent, no more than 300 people indoors and 500 people outdoors. Meanwhile, even though the regulations have begun to loosen up, Israeli airports will remain closed for another 2 weeks.
Israel is a country that is campaigning for the Covid-19 vaccine holistically and quickly. More than 49 percent of Israelis have received at least 1 first dose.
Israel itself has implemented a state lockdown for the third time on December 27 after cases of corona virus infection began to increase again.
Loosening of the current rules does not mean that Israelis are free to roam without green passports. The passport shows that a person has been vaccinated. The passport is obtained in an application issued by the Israeli Ministry of Health and will be valid for 6 months, 1 week after the second dose.
On Saturday, Israel's Health Ministry said research revealed the risk of viral disease had fallen by 95.8 percent among those who had been vaccinated against both doses of Pfizer. The Ministry of Health also found that the vaccine was 98 percent effective in preventing fever or respiratory problems. Prime Minister Benjamin Netanyahu said he hopes 95 percent of Israelis over 50 can be vaccinated over the next two weeks.