WHO Expert; at the beginning of the spread of the Covid-19, 1000 Wuhan residents were affected 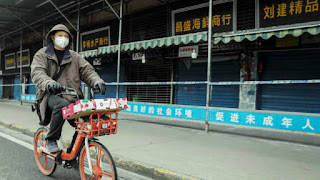 UMMATIMES - Based on reports from Chinese experts during an inspection, there were 174 cases of Covid-19 in Wuhan in December 2019.
Of the 174 identified people, as many as 100 people have been confirmed through laboratory tests, while 74 others were diagnosed through the patient's clinical symptoms.
Peter Ben Embarek, Head Researcher of the WHO Investigation Team. It is estimated that the virus has infected more than 1000 Wuhan residents in December.
World health organization experts predict that the number of people infected with the SARS-CoV-2 corona virus in Wuhan is 5 times greater than the Chinese government report.
Peter Ben Embarek said, "some of them are from the market ... some of them are not related to the market."
The market in question is the Huanan animal market in Wuhan, which was previously thought to have played a role in the first spread of the SARS-CoV-2 corona virus.
"The virus was widely circulated in Wuhan in December, this is a new finding."
"We haven't made any modeling about it ... But we know ... in a rough picture ... of the total infected population, about 15 percent have severe symptoms, and most of them are mild symptomatic cases," WHO said.
The lack of detailed data related to this new disease adds to concerns about the possibility that Covid-19 had spread in China long before its first official appearance in mid-December.
The investigative team from WHO spoke with the first Covid-19 patient. The first patient was an office worker in his 40s, with no travel history, and was reportedly infected on December 8.
In addition, Peter Ben Embarek revealed that a team of 17 WHO scientists and 17 Chinese scientists had collected 13 different genetic sequences of the SARS-COV-2 virus since December 2019.
This genetic sequence examination will be matched with broader patient data in China throughout 2019. Hopefully, it will provide clues to how and when the virus was transmitted before December.