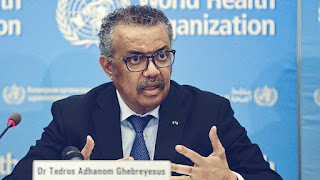 The percentage of decline was double-digit in new cases, with only the Eastern Mediterranean showing an increase of as much as 7 percent. Report of 5 WHO regions in the world, Thursday (18/2/2021)

The number of new cases fell 20 percent last week in Africa and the Western Pacific, 18 percent in Europe, 16 percent in America and 13 percent in Southeast Asia.

WHO Director-General Tedros Adhanom Ghebreyesus said on Monday that the number of new cases had decreased for the fifth week in a row, down by nearly half, from more than five million cases in the week of January 4.

"This shows that simple public health measures are working, even with new variants." "What matters now is how we respond to this trend. The flames are not yet extinguished, but we have reduced their size. If we stop extinguishing them on any front, the fires will return. roaring. " said Tedros Adhanom Ghebreyesus.