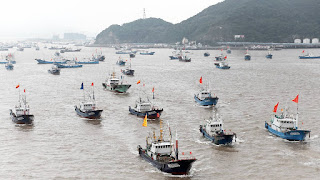 UMMATIMES - The Philippine government expressed concern after seeing more than 200 Chinese-owned fishing vessels in a coral reef zone claimed by the two countries in the South China Sea. Even so, the Philippines did not immediately file a protest against its findings.
A government agency overseeing the disputed territory said about 220 Chinese ships were moored at Whitsun Reef on March 7. They released images of ships lined up in one of the most contested areas in the region.
It said the coral reef zone, which Manila calls Julian Felipe, is a shallow, boomerang-shaped area of ​​coral about 324 km west of the city of Bataraza, Palawan province, western Philippines. The zone is within the exclusive economic zone of the country, in which the Philippines "enjoys exclusive rights to exploit or conserve any resources,".
It stated that the Chinese vessels "raise concerns due to possible overfishing and damage to the marine environment, as well as navigation safety risks". Meanwhile, it was added that the ships were not catching fish when they were seen.
When asked if the Philippines would raise a protest, Foreign Minister Teodoro Locsin Jr. tweeted, "only if the generals tell me".
Chinese Embassy officials did not immediately comment. China, the Philippines and four other countries have experienced a territorial standoff over the resource-rich and busy waterway for decades.
Critics have repeatedly lashed out at President Rodrigo Duterte, who has maintained friendly relations with China since taking office in 2016, for not opposing China's aggressive behavior and decided against urgently demanding Chinese compliance with an international arbitration ruling that invalidated China's historic claims. China has rejected the 2016 ruling and continues to oppose it.
The arbitration body also ruled that China had violated its obligation to respect the Philippines' traditional fishing rights when Chinese forces blocked them from Scarborough Shoal off the northwestern Philippines in 2012.
According to the ruling, the Philippines also cannot deny Chinese fishermen access to Scarborough. The ruling does not specify other traditional fishing areas within the Philippines' exclusive zone where fishermen from China and other countries are allowed to fish.
"When Xi said 'I'm going fishing,' who could stop him?" said Duterte two years ago when he defended his non-confrontational approach, referring to Chinese President Xi Jinping.
"If I send my marines to drive out the Chinese fishermen, I guarantee you none of them will come back alive," Duterte said, adding that diplomatic talks with China allow the return of Filipinos to disputed fishing grounds where Chinese troops are located. previous.
Duterte has frequently sought infrastructure, trade and investment funding from China, which has also donated and promised to deliver more COVID-19 vaccines as the Philippines faces a surge in coronavirus infections.