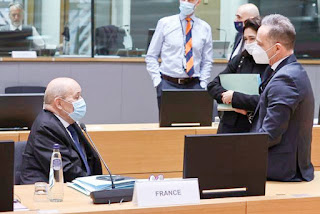 UMMATIMES - The military junta's not ending Myanmar's coup has made America nervous. Therefore, they issued new sanctions to increase pressure on the Myanmar Military. According to the Reuters news agency, two officials and two units of the Myanmar military were the targets of the new US sanctions.
"Our action today is an affirmation that we will continue to fight the coup leaders and those who instigated violence in Myanmar," said US Secretary of State Antony Blinken, Monday, March 22, 2021.
As is known, the Myanmar coup has been running since February 1. The action, which was triggered by the defeat of the military-affiliated party in last year's election, has claimed the lives of approximately 250 people. The majority of them were shot by the Myanmar military apparatus who claimed they did not expect resistance from the citizens.
Sanctions against the Myanmar military this time are not the first from America. They have issued various sanctions before, including sanctions related to the Rohingya crisis in 2017. However, specifically for the Myanmar coup, the sanctions from America specifically target those who are in the Myanmar Military and everything that supports their operations.
In the latest sanctions, one of the Myanmar Military officials who has been sanctioned is Than Hlaing. He is the Chief of the Military Police who was appointed after the coup began. The second figure is Aung Soe, General of the Special Forces Command who directly oversaw the massacre of Myanmar demonstrators.
Furthermore, for the two military units that were sanctioned, they were the 77th and 33rd Light Infantry Divisions. During the coup, they spearheaded the Myanmar Military to suppress demonstrations in Myanmar's two largest cities, Yangon and Mandalay.
With sanctions from America, Mr Hlaing, Aung Soe, and all personnel from the related Light Infantry Division could no longer visit America. In addition, they can no longer access financial services, take assets, or transact with entities in America.
"The video footage we received shows how Myanmar military officers boarded a truck shooting at residents and their homes," the US government said in a press release.
Previously, the European Union had already imposed new sanctions on Myanmar. The European Union has sanctioned 11 people who are deemed involved and responsible for the Myanmar coup.