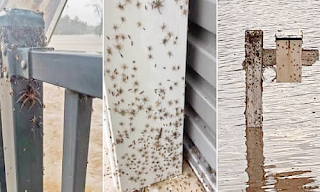 UMMATIMES - The Australian floods actually triggered the massive displacement (exodus) of wild animals that were there. The spiders and snakes fled to the highlands and began to enter people's yards or houses.
The flood itself was caused by rain that never stopped in Australia. Of all parts of Australia, the eastern seaboard is hardest hit with dams overflowing and causing uncontrollable flooding. New South Wales is one of them where 18,000 citizens have to evacuate.
On social media, New South Wales residents are busy sharing photos of wild animals fleeing into their settlements. One of them is Matt Lovenfosse, a resident of Kinchella Creek. Lovenfosse said that since the floods, his ranch is now full of runaway spiders.
"The brown color you see is not water, but a spider trying to escape," said Lovenfosse, Tuesday, March 23, 2021.
Lovenfosse was not surprised when the spider finally fled to his house too. He admitted that he had experienced it in 2001 and 2013 when large floods occurred. In those two moments, he said, the spider was soaked by the flood that it fled to his house, which is the highest point on his farm.
"Here it is still flooded and the water level continues to rise. The water continues to approach our house. If this doesn't stop, tomorrow morning the water will have entered and our house will be full of spiders," said Lovenfosse.
Lovenfosse did not intend to evacuate. According to him, whether there were spiders or not, his house was the safest point. After all, he said, he had experience with wild animal invasions and spiders not the worst.
"If you check the tree, it's also full of snakes. I've lived here for a long time, living surrounded by spiders, snakes and other wild animals. They don't really bother us because they rarely come into direct contact," said Lovenfosse.
TikTok user Shenea Varley uploaded a video showing a spider entering her porch. He said, if the terrace of the house is wet, spiders will not hesitate to climb into the human body too.
New South Wales state PM Gladys Berejiklian said the flooding would continue with the latest predictions showing the rains would remain heavy. He is considering evacuating more people.
"I don't know if there has ever been a flood of this magnitude in the history of extreme weather in New South Wales, especially with the COVID-19 pandemic in Australia," said Gladys Berejiklian, amazed by the Australian Flood.