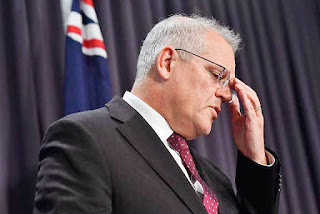 UMMATIMES - Prime Minister Scott Morrison tried hard to hold back tears when giving a press statement regarding the alleged rape that took place at the Australian Parliament Building.
Prime Minister Morrison has defended himself against criticism that has emerged over his response to the rape of Brittany Higgins, a former Liberal Party staffer.
Brittany has admitted to being raped by colleagues in the office of a minister in March 2019. PM Morrison said his wife had told him what if something like that happened to their daughter.
"Please criticize me for talking about my daughters. But they are the center of my life. My wife is the center of my life. My mother is the center of my life," he said with teary eyes.
Prime Minister Morrison was angry and dismissed questions from journalists who speculated that he may have lost control of the ministerial staff in his government.
He also admitted that he was very stunned and disgusted after learning about another case where a staff member recorded and shared the sexual acts they committed inside the Parliament Building.
Last Monday (22/03), a staff member was fired after allegedly engaging in indecent acts on the work desk of a woman MP from the Liberal Party.
PM Morrison plans to gather the entire staff of members of parliament from the Coalition on Tuesday to discuss this case and other issues related to the treatment of women.
PM Morrison became very emotional when he explained how important the figure of a woman in the family is to his life.
He has been criticized by the media for the handling of the Brittany Higgins case and the alleged rape case committed by Attorney General Christian Porter more than 30 years ago.
"It is women who suffer the consequences of this trash and nonsense all their lives, as well as their mothers, as well as their grandmothers," he said.
"I acknowledge a lot of people who don't like or appreciate my personal response to this over the past month," said Prime Minister Morrison.
He revealed that he had received input from State Attorneys and had asked for input from his department whether Attorney General Christian's position could be maintained. Attorney General Porter is currently on leave for medical reasons.
Separately, Industry Minister Karen Andrews on Tuesday morning urged the need for serious consideration for the Liberal Party to increase the number of female candidates in the electoral districts controlled by this party.
PM Morrison said he was very open to such proposals. "We have tried other ways, but did not get the results we wanted," he said.