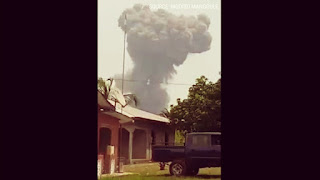 UMMATIMES - The explosion at the Equatorial Guinea military barracks claimed many lives and injuries. Authorities confirmed at least 20 people were killed and more than 600 injured.

The explosion that occurred on Sunday (7/3) at around 16.00 local time was caused by "negligence in handling the explosive device" at the military barracks located in the Mondong Nkuantoma area, Bata city. "The impact of the explosion caused damage to almost all houses and buildings in Bata," said President Teodoro Obiang Nguema.
The Ministry of Defense stated that a fire broke out in the arsenal of the military barracks, causing an explosion of high caliber ammunition. It will also investigate the cause of the explosion soon. Sunday (7/3) evening local time.
The Defense Ministry said health workers were treating the injured at the scene and in medical facilities, but feared that people would still be trapped under the rubble.
Foreign Minister Simeón Oyono Esono Angue met with foreign ambassadors and asked for help. "It is important for us to ask our sister countries for help in this sad situation because we have a health emergency (due to COVID-19) and a tragedy in Bata,"