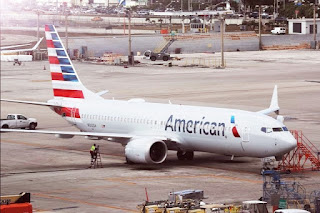 UMMATIMES - The Boeing 737 MAX aircraft belonging to American Airlines managed to land safely after the pilot turned off one engine during the flight. The plane landed in Newark, New Jersey, United States on Friday (5/3) local time after departing from Miami.
The Boeing 737 MAX aircraft returned to service in the United States late last year after being grounded worldwide in March 2019 following two deadly accidents.
The US air safety regulator, the Federal Aviation Administration (FAA), said Saturday "the pilot reported turning off an engine in flight" but that the plane could glide to its gate on its own. The FAA said it would investigate the incident.