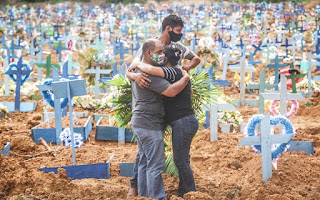 UMMATIMES - For two consecutive days on Wednesday (3/3), the deaths in Brazil were 1,910 people. This number is higher than the daily death rate on the previous day of 1,641 people. According to data from the Brazilian Ministry of Health, the record this time brings the total deaths due to Covid-19 to 259,271 people.
Brazil is the second country after the United States with the highest death toll from the corona virus in the world.
"For the first time since the pandemic started, we are seeing a decline across the country. The situation is becoming increasingly alarming," said public health agency Fiocruz.
To date, Brazil has recorded 10,722,221 cases of corona. The increase in the number of new Covid-19 cases has overwhelmed hospitals and medical personnel.
President Jair Bolsonaro has come under sharp criticism for often underestimating the spread of the corona virus. He also often ignores expert advice in the midst of lockdowns and the mandatory use of masks.
Experts say the conditions for the pandemic in Brazil are exacerbated by the emergence of a new variant of P1 in the Amazon city of Manaus, triggering a spike in new cases. The P1 corona virus was found in 17 of the 27 foreign countries in Brazil.
Several Brazilian state governments have agreed to a joint venture to buy a corona virus vaccine and do not wait from the central government. This is because they think the central government's vaccination program is too slow.
In mid-February, the Brazilian Police were investigating suspected corona vaccination fraud in the City of Rio de Janeiro. The investigation was carried out after the police received reports of a number of photos showing a group of medical officers injecting a syringe with an empty tube without the contents of the Covid-19 vaccine into the arms of several elderly people.